Stand up and Mindfulness 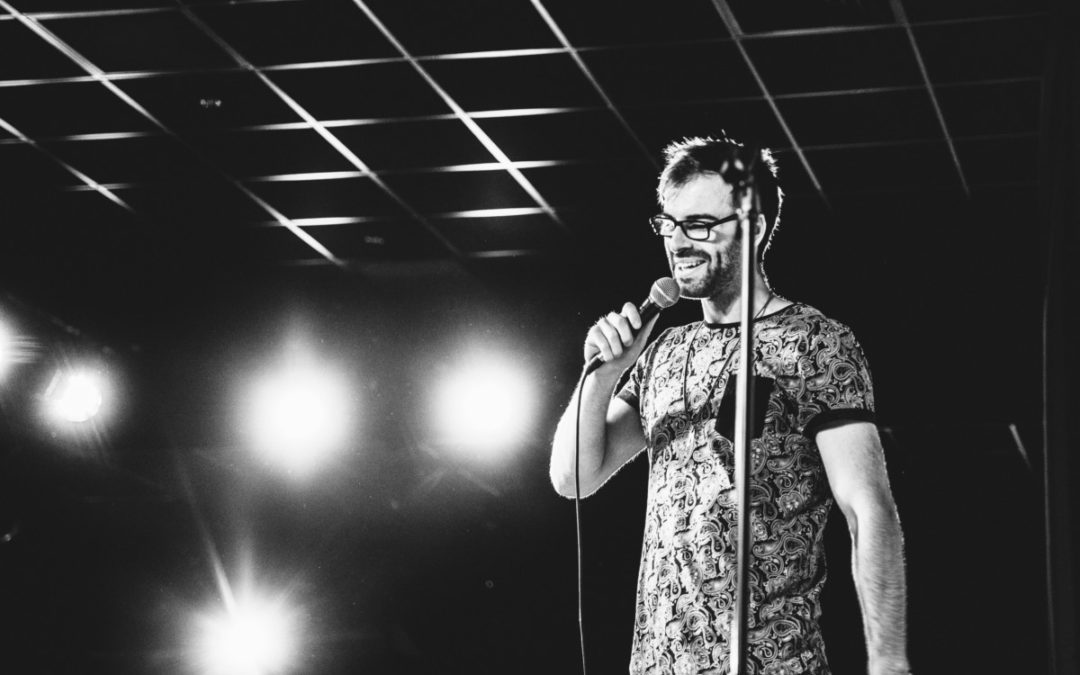 A Shameless Vanity Piece by Josh: A practitioner at Valleys Steps.

I was sat in my car on a rainy Friday in Pontypridd. I was hurriedly eating Szechuan noodles in the hour I have between mindfulness classes I teach for Valleys Steps. I barely tasted a bite of it. My mind was elsewhere, flitting from thinking about the course I was about to deliver and running over the events of the night before. I had won the Welsh Unsigned Stand Up Award, and I was over the moon! Soon my phone rang, it was BBC Cymru, and I had to tell them that I couldn?t have the interview I?d been looking forward to now, because I was about to teach a mindfulness class. The woman on the phone seemed perplexed: ?Mindfulness?! That?s like the opposite of stand-up comedy!!?

In many ways she was right. I spend half of my day telling people to ?live in the moment? and the other half on stage telling people stories about ?the other day?, that actually occurred three years ago! I teach people not to pass judgement during mindfulness, yet, I will come off stage from a successful gig with the silence from one failed joke ringing in my ears. I teach people the power of acceptance, while I continually strive to be better, quicker and funnier. Am I a hypocrite? Definitely. But not in this particular respect.

When people meditate, practicing awareness, acceptance and non-judgement they develop these qualities until they become traits. It becomes easier to live in the moment, not to judge circumstances that are out of your control and to accept that which you cannot change. But crucially, we get to decide when to switch these qualities on and off.

If I?ve had an awful gig in the corner of a pub using a karaoke mic to tell jokes to a bunch of blokes watching the football – it might feel like the end of the world. But the next day, I need to get over it, fast, before I let events that were out of my control dent my confidence. Here, it is helpful not to pass negative judgement on this experience, to accept it as part of the journey and to return to the present moment and leave it behind me. However, sometimes factors within my control like my material or my delivery are why people didn?t laugh. Perhaps I?ve used reference points people don?t recognise, or come off too aggressive. If so, I should go over and over it, and make changes so that doesn?t happen again. If I don?t pass negative judgement here I will make the same mistakes time after time. Sometimes we need to put the past behind us, and sometimes we need to review the past to learn from our mistakes. Mindfulness is about choice. We practice acceptance, non-judgement and awareness, so that it becomes easier to adopt these qualities when we need to. But we also learn to recognise when not to be mindful, like when we are considering making a change or a choice.

Tough gigs hurt. We evolved in groups of 40-50, where social humiliation could mean rejection from the group and ultimately death. This is why people call it dying on stage. When we suffer social embarrassment, our auto-pilot thinks we need to go over and over it, even if you?ll never see those people again. Mindfulness is all about stopping automatic thinking, and deciding where to direct your attention. So you can decide to get past the lows, and leave them in the past and sit in the present moment instead. But you can equally decide to ignore the present moment on a rainy Friday, revelling in the previous night?s successes if that?s what makes you feel good. You can even sit on your computer two weeks after that day, writing a self-indulgent thought piece, just so you can think about it again! No one can tell you what to think, but with mindful meditation, at least you get to decide for yourself.